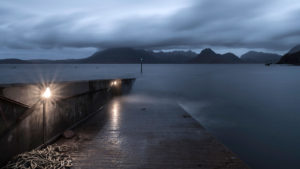 ‘The Blackletter Quartet’, a new music ensemble, had an idea: to write and record an album on Stroma, an abandoned island off the north coast of Scotland.

Five years after the Quartet’s disappearance, ‘The Stroma Sessions’ – a series of audio files charting the musicians time on the island and the music they created there – were discovered on the internet.

Stroma was abandoned in the early 1960s: its few remaining buildings stand dilapidated, battered by the North Sea. The four musicians sought inspiration in the ruined houses and unforgiving weather. They wanted to make music in a ghost town. The evidence suggests they found what they were looking for.

‘The Stroma Sessions’ is an Afonica production for BBC Radio 3