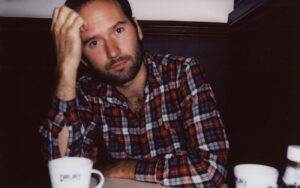 Works with Afonica – The Frozen River

From an early age Rob was turning his family holidays into full-on film shoots with late finishes and sunrise starts. Decades later and he’s still at it, now colliding the disciplines of geography and filmmaking to tell stories that challenge existing narratives of identity, landscape, citizenship, surveillance and power.

A graduate in Directing from the National Film and Television School (where he was David Lean Scholar) Rob is also co-director of the creative studio Milkwood.

Rob recently completed the critically acclaimed experimental film Upstream (BBC Four) with the writer Robert Macfarlane. Billed as a ‘dream-flight into wildness and winter’, Upstream was filmed entirely from the air and follows the course of a Scottish river to its source in the Cairngorm mountains. He is also working on a number of other feature and installation projects, a mini series for Radio 3 as well as ‘And We Will Be Ghosts’, a collaborative project with fellow filmmaker Harry Macqueen which documents folklore, rites and rituals across the English landscape.

In addition to his work with Milkwood, Rob is part of the comedy collective Duke. He also lives on a boat.