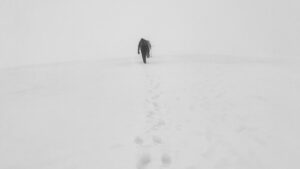 “One cannot know the rivers till one has seen them at their sources; but this journey to sources is not to be undertaken lightly… There are awakened also in oneself, by the contact, elementals that are as unpredictable as wind or snow.”
– Nan Shepherd, The Living Mountain.

Here was a warning that director Rob Petit chose to ignore when he began making the film Upstream together with the writer Robert Macfarlane. An aerial journey that follows the course of the River Dee in Scotland, all the way to its source high up on the Cairngorm Plateau, the highest of any river in Britain. What begins as a foolhardy adventure becomes a humble awakening to the power of wild places to transform our reality.

Adapted from Petit’s expedition diaries, the soundscape weaves together a haunting original score by Oscar-nominated composer Hauschka and spellbinding location sound from the high mountains, recorded over a period of three years. Poetry and text by Robert Macfarlane are voiced by award-winning Gaelic singer Julie Fowlis in this immersive and tonal piece of audio storytelling across five compelling episodes.

The Frozen River is a story of misread signs and missing maps, of strange ghosts and altered realities, a pilgrimage to loss… and being lost.