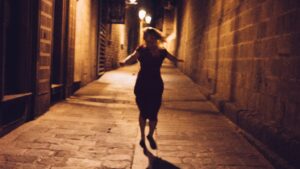 A story of love in a time of war starring Maxine Peake.

Barcelona, 1930s: Natalia, a pretty, naive shop girl from the working-class quarter of Gracia, is hesitant when a stranger asks her to dance at the fiesta in Diamond Square. But Quimet is charming and forceful and she takes his hand. They marry and have two children although Quimet proves an unpredictable husband. He gives her the nickname of Colometa, meaning Little Pigeon, and breeds the birds in their apartment.

Set against the backdrop of the turbulent years of the Spanish Republic and Civil War, Natalia experiences the conflict from a city in turmoil as she fights for her and her children’s survival.