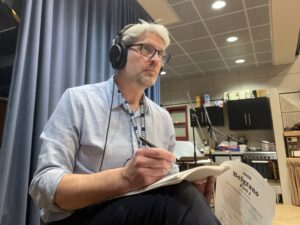 Richard Monks is an award-winning writer and director working in television and radio. He studied Film Direction and Scriptwriting at the Royal College of Art and was awarded a PhD in Creative Writing by Lancaster University. His radio work includes Hearing Sense, which won a Sony Award, One Church, which won an IVCA award for best radio drama in 2005, and a number of critically acclaimed series, including Donor Trail, Shattered and Belgrano. Recently he was one of the core writers on Radio 4’s landmark WW1 drama serial, Home Front and was also part of the writing team behind Radio 4’s popular detective series, Stone, starring Hugo Speer. In addition to his writing, he is the Programme Leader for MA Screenwriting at Liverpool John Moore’s University.