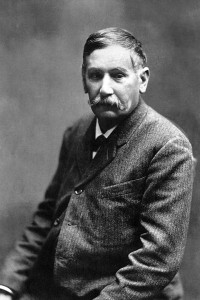 Benito Pérez Galdós was a Spanish writer, representative of the Realist Spanish Novel of the 19th Century. Member of the Royal Academy from 1897 and nominated for a Nobel Prize in 1912.

He studied in the Colegio de San Agustín of his native city and collaborated with the local newspaper El Ómnibus. On finishing school in 1862, he moved to Tenerife in order to study a BA and later moved to Madrid to study Law. It was there that he attended the tertulias in the Ateneo and the cafés Fornos and Suizo where he met many intellectuals and artists of the day. He wrote for the newspapers La Nación and El Debate.

In 1873 he began the publication of the first series of his Episodios Nacionales with the novel Trafalgar. His popularity with readers during the 1890s continued to grow with his second series of Episodios Nacionales. He stayed mainly in Madrid but also spent long periods in his house in Santander, known as “San Quintín”.  He travelled throughout Europe as a press correspondent, thus coming into contact with literary currents of the day such as realism and naturalism. His work was influenced by the French writers Honoré de Balzac, Émile Zola, Gustave Flaubert as well as Charles Dickens.

Interested in politics, he joined Sagasta’s Progressive Party and in 1886 was appointed MP for Guayama (Puerto Rico) in the Spanish parliament Las Cortes. At the beginning of the 20th Century he joined the Republican Party and in the Legislatures of 1907 and 1910 was Member of Parliament for Madrid with the Republican-Socialist Conjunction; in 1914 he was elected MP for Las Palmas. Galdós was one of the most prolific authors of his generation, in both novel and theatre.