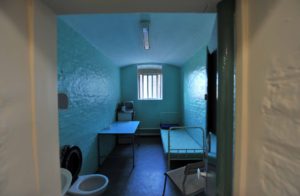 Solitary confinement, or segregation, is described as ‘deep custody’ and has three key characteristics: social isolation; reduced sensory input and activity; and an increased control of prisoners. Some spend as long as 23.5 hours a day locked up alone inside the most basic of cells.

As of January 2015, the total segregation capacity in England and Wales was 1586 cells with 9% of those occupying them segregated for longer than 84 days. Prisoners are entitled to a short period of exercise, a shower, and a phone call daily. In some segregation units in the UK, prisoners have to choose between having a shower and taking exercise, with periods of exercise lasting less than 30 minutes. (From “Deep Custody: Segregation Units and Close Supervision Centres in England and Wales” by Dr Sharon Shalev and Kimmett Edgar – 2015).

Hannah Silva’s drama explores the intensely horrific experience of segregation. Within the confines of her tiny cell, Mandy is entirely cut off from the world. Yet she is unable to keep out the unbearable weight of her past.

‘Solitary’ is informed by the accounts of women prisoners who have experienced segregation for prolonged periods in UK prisons.