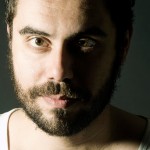 Graduated from the Real Escuela Superior de Arte Dramático with a degree in performing arts. Winner of Radio Nacional de España’s El Ojo Crítico de Teatro 2013 prize and the Réplica award for best author from the Canary Islands for his work Porno casero. Translated and adapted Blasted by Sarah Kane and Have I None by Edward Bond. Amongst his original works are En el cielo de mi boca and Sagrado Corazón 45. At the first edition of the Almagro Off competition, his play Malcontent won a special mention from the jury. In 2012 his version of Henry VIII opened at the Globe Theatre in London. His adaption of Oscar Wilde’s The Importance of Being Earnest, created together with Alfredo Sanzol, was nominated for a Premio Max for Best Newcomer. He wrote and directed Click Here in Decemeber 2013 as part of the Centro Dramático Nacional’s Escritos en la escena cycle.