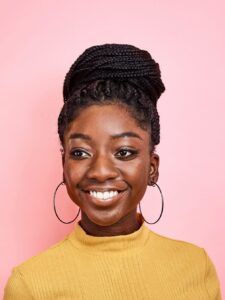 Eno Mfon is a screenwriter, playwright and performer. Her writing is political, unwaveringly honest, and resolutely human. Following the success of her one-woman show CHECK THE LABEL, which she wrote and performed at the Bristol Old Vic, Eno adapted and directed the play for the television as part of Channel 4’s Random Acts (it won an RTS award). Her second play SHIPPED, which was supported by Theatre West and directed by Jesse Jones, was staged in Bristol.  Set within the tense political climate in Nigeria, it explores the cultural differences between a Nigerian uncle and his Londoner-niece when she’s sent to stay with him for the holidays. She has also worked with Talawa theatre company as a writer and performer on their Talawa Firsts programme. She is currently under commission at the Almeida. Eno was part of the BBC Writersroom 2018, and her work on the new audio drama series ‘One Five Seven Years’ by Marietta Kirkbride for BBC Radio 4 is now available on BBC Sounds. She has also contributed to and performed in the Royal British Legion remembrance campaign ‘Pause’ for the past two years. Eno is currently in the writers room for Devils S3 and has been commissioned to write one episode for Big Light/Lux Vida.